We performed more CTDs overnight and obtained more water samples for methane and stable carbon isotope analysis, pausing only for an intense late-night thunderstorm. we then performed more ME70 lines in the tilefish habitat. Leo is still working on translating ME70 data for post-processing. The raw data from ME70 has a different format from all other Simrad products, and is therefore not directly useable with Caris HIPS, the post-processing program that Leo is using. Thus, as previously with ME70, we are collecting data “in the dark” without immediate feedback on quality or need for adjustment. This would not have been the case with the Bathy Option, which includes the software to create a cumulative image that can be examined for discrepancies. The breakdown of the installed on-loan Bathy Option just before the cruise has been a vexing problem, and we find ourselves having to work very hard to find a way around that problem, but we have not given up yet. 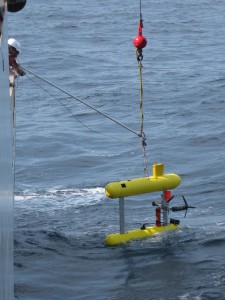 As we were unable to operate Mola Mola because of weather yesterday, we were anxious to launch today. Despite the successful test run on Saturday, we had some problems with the AUV. A glitch in the onboard computer caused it to try to reboot repeatedly, which triggered it to surface as an automatic safety response. Hence, we got only a short dive in before having to recover the vehicle. The recovery proved very difficult in marginal sea conditions, and was very time consuming. We devised a new vehicle recovery scheme for tomorrow, but operations could not be continued. 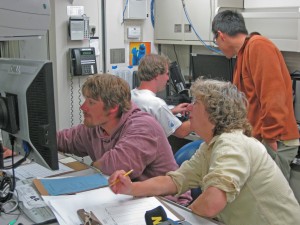 In place of Mola Mola operations, we began the hydrography watch early and got more CTDs done while also working out the computer problems with the AUV. Tomorrow (Tuesday) looks like the best day of the week for calm sea conditions, so we look forward to a great AUV mission on a rocky cliff area where deepwater corals are most likely to occur. In the meantime, I will be sending photos from our short dives thus far back to Sandy Hook, along with other materials explaining our mission.

We again noted the apparent “wall effect” on water column organisms in the canyon: large aggregations visible at 18, 38, 120, and 200 kHz between 150 and 200 m over the walls of the canyon, but not over the shelf or over the thalweg (middle) of the canyon. Mola mola photos during descent and ascent show large concentrations of suspended matter, small fish and shrimp-like crustaceans in the water column, which may account for the acoustic phenomenon. Why they appear to concentrate over the sloping walls and not elsewhere is unclear.

Weather today was sunny and warm, but the breeze made sea conditions difficult for work over the side, e.g. AUV recovery.