Good Morning All,
Since our last update on Saturday the Pisces has completed sampling the southwestern Gulf of Maine stations and started working east across the northern flank of Georges Bank and into the eastern Gulf of Maine area. We have just completed sampling at the Northeast Channel and are currently heading for Browns Bank. We have made a few more midwater trawls since last time with the Shallow Water midwater trawl and one with the Isaacs-Kidd midwater trawl. Although the catches have been very small, consisting of a few silver hake and Atlantic herring, we did manage to get a few fish to try out in the respirometer chambers. Some data was collected from the Atlantic herring caught this past weekend. We had one butterfish which didn’t do well in the chamber, but we had better luck with a lumpfish, which is currently still in the chamber and yielding good data.

Chris Taylor, Rich Bell (holding a respirometer chamber with a herring in it) and Grace Saba working to gather some data on the oxygen consumption of an Atlantic herring. Photo by Jerry Prezioso, NEFSC/NOAA

“Lumpy”, as he has been christened, even managed to gulp down a shrimp from the holding tank which was still sticking partly out of his mouth when he was transferred to the respirometer. Oxygen consumption data has been gathered from this fish for several hours now, showing a series of classic oxygen consumption curves, when the amount of oxygen in the water is plotted over time. The oxygen level in the chamber with the respiring fish starts at a high level, then drops at a steady rate until freshly oxygenated water is introduced, and the cycle repeats itself, with the rate of decline changing depending on the stress levels of the fish. 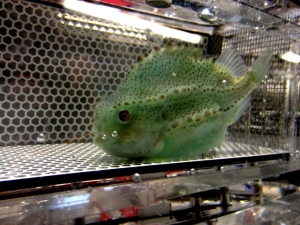 “Lumpy” in a respirometer chamber equipped with flowing seawater. If you look closely you’ll see long thin red shrimp spines protruding out from his mouth. Photo by Jerry Prezioso, NEFSC/NOAA

The oxygen consumption cycles from “Lumpy” showing cycles of oxygen decline over time as seen from a laptop connected to the respirometer. Photo by Jerry Prezioso, NEFSC/NOAA

The logistics of the respirometry project have been daunting, but the researchers have met the challenges of plumbing, software, and obtaining viable fish, all while working under typical November sea conditions to start getting some positive results. Pictures of this interesting, on-board experiment will be posted on the nefsc.wordpress.com website. This work has been in addition to the continued collection of plankton samples, hydrographic data, and trawl catch assessments.

With a favorable forecast for the next few days, the Pisces is currently steaming along at between twelve and fourteen knots to cover the Gulf of Maine before the next front is due to hit us later this week. We hope to be in sheltered waters near the entrance to the Cape Cod Canal by then, poised to move on to the southern portion of this survey which will take us to Southern New England and the Mid-Atlantic Bight.

One thought on “Lumpy and the Respirometer”