The Gordon Gunter is just finishing up Leg 1 of the Spring Ecosystem Monitoring Survey.  By tonight we will have completed sampling at ninety-two stations, encompassing  all of the Mid-Atlantic Bight and Southern New England areas.  We were very lucky in that the low pressure system that threatened to make conditions unworkable on Georges Bank dissipated and we were able to reach some stations on its southwest corner, thus freeing up Leg 2 to concentrate more on the rest of Georges and the Gulf of Maine.  After docking at Naval Station Newport on Friday morning, the Gunter will be in for the weekend and then pick up a partially new scientific complement on Monday, Memorial Day, and sail that afternoon.

A loggerhead turtle photographed on day 5 of the cruise. Photo by John Loch, Integrated Statistics

A pod of common dolphins, also photographed on day 5 of the cruise, by John Loch, Integrated Statistics.

While out here I received an email asking why we are doing this work out here.  I’ve given a lot of thought to how we do our research, but not so much about the why.  It’s a fair question. Maybe in these times of discussion about how much and how fast our climate is really changing and how much is caused by man, this becomes a question that we should be readily prepared to answer.
My answer would be that we need to do these ecosystem monitoring surveys because we are on the front lines of observing and documenting first hand what’s going on in our coastal and offshore waters.  The science staff, aided by the ship’s command and crew, is working 24 / 7 to document as much as they can about the water conditions, not just on the surface but down to 500 meters, by measuring light, chlorophyll, and oxygen levels as well as nutrients available.  Water column temperatures and salinities are profiled and Dissolved Inorganic Carbon (DIC) levels are checked as a way of measuring seawater acidity at the surface, mid-water and bottom depths. What planktonic organisms are present?  Plankton tows across the continental shelf down to 200 meters are made to collect them.  What large marine organisms such as whales, turtles and seabirds are present in different areas and at different times of the year, and are they different from one year to the next?  From one decade to the next? Two seabird observers work throughout the daylight hours to document and photograph large marine organisms encountered along our cruise track.  Without this information being gathered on a regular basis and in a consistent manner over a long period of time, we would have no way of knowing if things are changing at all.
So that’s my answer.  I want to point out that it is really a team effort to collect all these data and samples.  I want to thank the ship’s crew and command for making this cruise a real success, even when we didn’t get the typically benign May weather I had been expecting!  The command was checking our potential cruise track constantly to take weather set-backs into account and keep us working at maximum capacity, even when we were slowed down due to seas and winds. 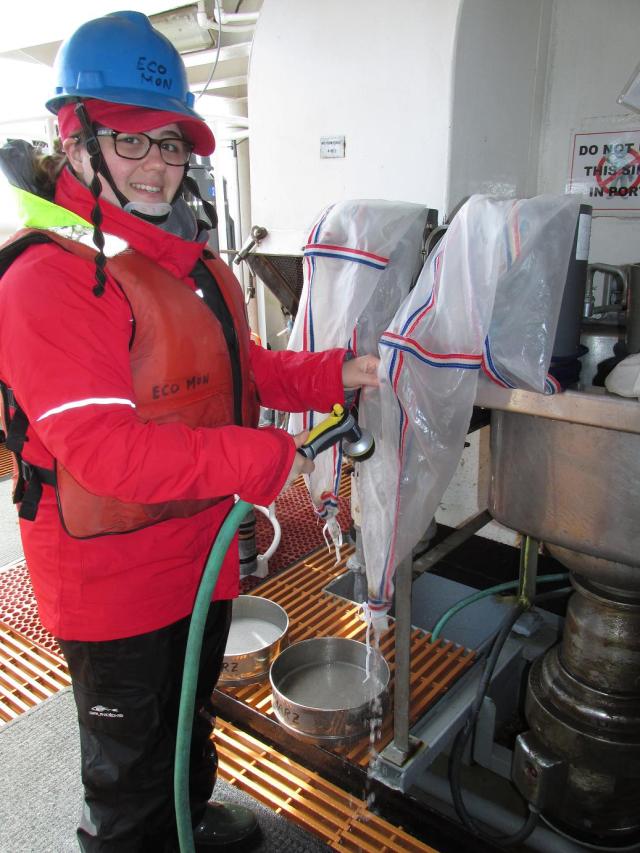 The crew kept the ship running smoothly with not a minute lost to any mechanical problems, and deployed the bongo nets and CTD-rosette safely and efficiently even when conditions were less than ideal.  We couldn’t ask for better accommodations or food.  Every meal offered a variety of entrees to satisfy a variety of tastes.  And the science staff did a super job, with veteran sea-goers training newly arrived students, one of them at sea for the first time ever, to fit in and take up their tasks of collecting data and samples from the ninety-two stations that were completed during this leg. 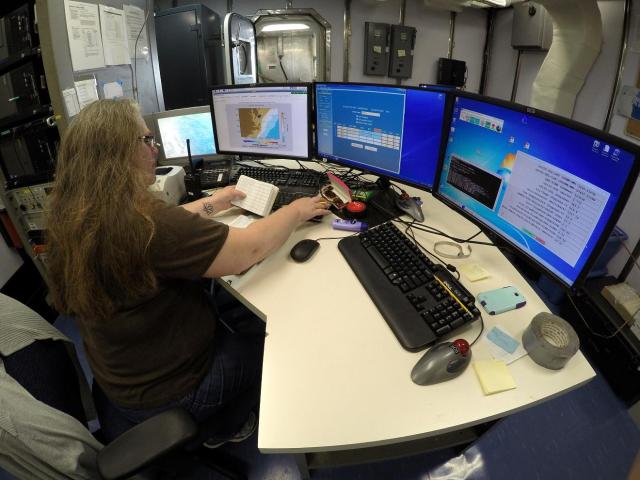 CTD specialist Tamara Holzwarth-Davis processing data from a just-completed bongo net deployment as the “mission control center” in the dry lab of the Gordon Gunter. Photo by Jerry Prezioso, NEFSC

Thank you all for making this trip such a success. I’ve had the pleasure of sailing with many of you in the past, and I hope to do so again!
Jerry Prezioso
Chief Scientist
Spring Ecosystem Monitoring Survey GU1701