This will be the final update from this cruise as we are coming in to the Newport Naval Station ahead of an advancing storm which precluded any more operations in the Gulf of Maine, our last area to be surveyed.
We have completed 114 stations over the entire area of the survey, which now covers continental shelf waters from Delaware Bay north through Southern New England, Georges Bank and about two thirds of the Gulf of Maine.  We were unable to reach the Scotian Shelf and northern stations that extended up into the Bay of Fundy.  If our excellent weather had held a couple of more days our coverage in the Gulf of Maine could have been improved, but I can’t complain about weather that was perfect up until early this morning! 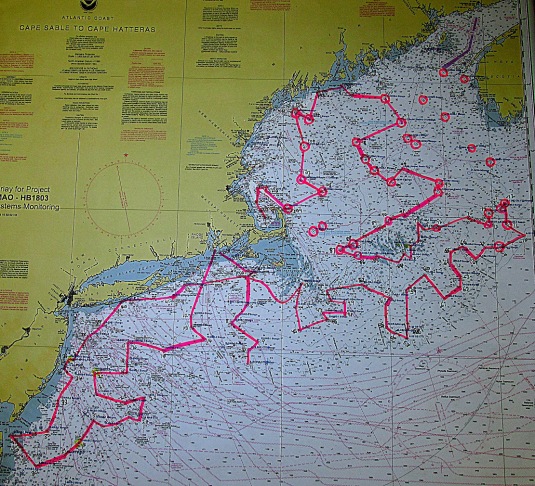 Cruise track drawn as a red line on a paper chart showing the areas visited by the Henry Bigelow during this survey.  Photo by Jerry Prezioso, NOAA Fisheries/NEFSC 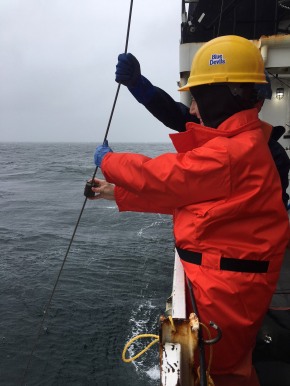 Our Teacher-at-Sea, Susan Dee, drops a messenger to trigger a water sampling bottle. Scientists were able to coordinate in-water optical light measurements during times when the vessel was stationary like this. Photo by Jerry Prezioso, NOAA Fisheries/NEFSC

I have learned a lot from this cruise in terms of having scientists from different agencies and countries work together sharing a survey and a vessel as closely as possible so that all could come away with enough data and samples to judge this trip a success for each of them. I’d like to thank the scientific staff for their patience and hard work in planning to make our sampling as efficient as possible. For example we learned that satellite optical measurements can often be made simultaneously with work where the vessel is stationary, like during vertical ring net tows and CTD rosette water casts.  This didn’t work every time, but I appreciate the effort the investigators made to try this, saving a significant amount of vessel time.
The vessel time we did have was maximized by a terrific effort from the crew and command of the Henry Bigelow who made every effort to keep us moving forward at maximum speed, up to 12 knots and sometimes more, much of the time, covering as much ground as possible in the time allotted to us. The command met with me every day to discuss our operations plan under the prevailing and forecast weather conditions.  Operations that they had not encountered before, like vertical ring net tows, were worked out, often with input and discussion from the crew, who brought up suggestions like modifying depressor weights, and maneuvering the vessel to avoid having the gear come under the keel during retrieval. The crew also contributed to overall morale with events like Sunday night ice cream socials, thanks to the efforts of our stewards Dennis Carey and Ray Burgess.

Steward Ray Burgess saving a meal for a scientist who missed meal time while working on deck.  Photo by Jerry Prezioso, NOAA Fisheries/NEFSC 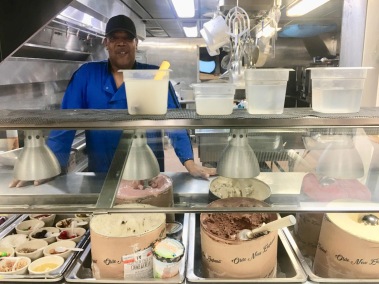 Now as I look over the boxes of samples we can look forward to unloading later this week, I want to thank everyone involved with this trip for your time, patience and good spirits.  I will look forward to sailing with you all again, anytime!
Jerry Prezioso
Chief Scientist
HB1803 Spring Ecosystem Monitoring Survey